To create a video game, you need to have a script or story on which the game will be based. In this article, you will learn to write a video game script. Also, we will discuss the pointers that you should take care of while writing a script.

Always remember that building a whole video game take effort, time, people, and money. For this reason, try not to add more complexity if the overview doesn’t seem like one. Adding complexity would take a lot of time to bring to life for the developer. It is a good practice to take suggestions regarding such additions in the story.

See Also: 10 Ways To Fix Windows Was Unable To Complete The Format

Things To Take Care Of

There are a few things that you need to remember when you write a script for a video game.

Further in the article, you will learn these steps in detail, so stay tuned.

How To Write A Video Game Script?

Writing a video game script might seem exciting and a go-to job for a beginner. It is not at all easy; however, with practice and experience, you learn many things about writing the perfect script. 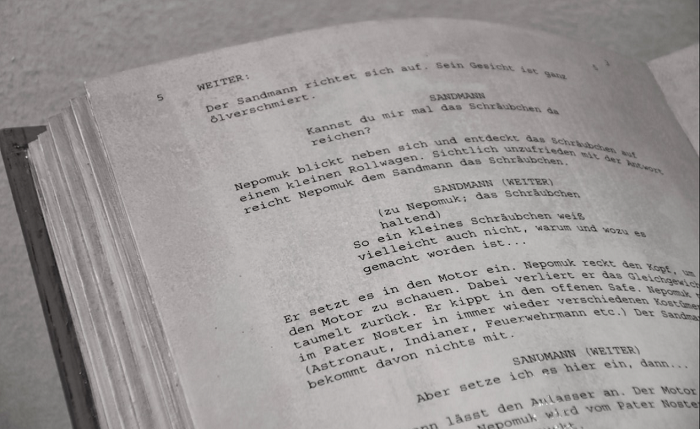 These steps won’t be the only way to make you write the best script for a video game. But it will guide you to the path you need to know while writing. Let us understand these methods in detail to help you better in the writing part.

Outlining or creating a storyline is a major start to writing a script. It doesn’t matter whether you have been using this step or not but creating an outline gives you a frame in which you need to plot your whole story. While outlining, you might have different possibilities of ending the story. That gives you scope to frame your story in a better way and helps you to remember all that you wanted to add. It will also provide an overview of what is actually going right with the story and where it is going.

In the storyline, you can add characters, their roles, and plot scenarios to make changes to this storyline whenever required.

Whether you like to play games or not, deciding what type of game you want to write the script for is essential. Videos games have different genres; based on that; you should step forward in writing.

One way of deciding and setting the type of game you want to write about is by playing different games. It will help you get a good idea of what you can write about. The motive is to create an interactive story that provides a nice user experience to the player.

There are various types of game genres, and a few of them are Action-adventure, Role-playing game (RPG), First-person shooter (FPS), and Puzzles. Many more genres are available in the world of video games, and you can even combine them to create the best version of the script.

Now that you have decided what type of game you will write the script for, you need to create a world. You might think the characters are important and the first thing to develop. That is not wrong completely; however, you must also write from the player’s perspective.

Of course, the player would first be interested to learn about the game’s characters. But also, after they figure them out, the player’s focus will mostly be on the world and what that will provide them in the game.

Therefore, it is recommended to create the world for the game first before you jump on to develop its characters. Also, remember that the world and the characters must resonate with one another.

Characters also depend on the type of game you are writing for. Try to make the main character stand out from other characters in the story. Give it special access to tools, some powers, or anything that resonate with your game type.

Flowcharts help a lot to understand all kinds of possibilities while writing a story. It will provide an overview of how the story should go and if it is going in the right direction. The possibility is that flowchart will open up a wide scope for new trials that you can consider adding or if something is not fitting well with the storyline. You need not write too much detail in the flowchart and get an idea.

Now that you have everything ready in the form of a base, you can start writing the major story. Directly diving into this section can confuse a lot. Following the step-by-step process becomes quite easy to follow. You can write the story as a summary, or you can opt for writing it as a cutscene. The most recommended way of writing the major story is the cutscene. Here you write about the minimal interaction and activity. It becomes easy to combine later and create the whole script. Writing the major part will help you understand what matches with the game.

This is the last step that comes first to our mind as we have a lot of ideas to fill in. After experience and much practice, you can consider writing this step whenever you feel it. Please don’t make that mistake, as it will only bring you nowhere and frustration. Adding tiny details to the world, character, and overall game will give life to the video game. The player should feel the interactivity with the world you created. You can add non-playable characters that are responsive in the game. Items and objects related to games give a feel about the world you have made.

What degrees do I need to become a video game script writer?

You should have a degree in creative writing and scriptwriting. If you have an English and literature-based degree, it will be a plus for you. You can even team up these degrees or courses with fiction writing and storytelling.

A good story needs characterization, the game's pace, planning, plotting, and dialogue. With plotting, you should also add other elements to make your story interesting, unique, and responsive for the player.

In what script the video games are written?

The Final Storyboard SCript is used by video games to write the script. It is similar to a feature that you will find in film screenplay while the video game development process continues.

How many pages long should the video game script be?

To write every detail about the characters, dialogues, tools, and the world, the script length could vary from 300-600 pages. Still, it depends on the type of game and how many ending and plotting you have included in it.

Sometimes, it happens that the idea is unique, but when you write it, it doesn’t come out the way you thought. Planning the storyline and following a process will help you overcome that situation.

The process of writing video game scripts also opens up your mind to think beyond. The creativity comes out beautifully in the form you thought. The imagination shows us many paths to go on, and the process makes it simpler to choose.

Mauro Huculak is a technical writer. His primary focus is to write comprehensive how-tos to help users get the most out of Windows 10 and its many related technologies. He has an IT background with professional certifications from Microsoft, Cisco, and CompTIA, and he’s a recognized member of the Microsoft MVP community. How To Sell Network Switches – A Complete Guide